5 min read
Mill Park Stud is a 10,000 acre property on the limestone-based country of South Australia with 2000 acres dedicated to their successful thoroughbred operation. TDN AusNZ’s Paul Vettise chatted with Chris Watson about their thriving business.

Paul Vettise: How many broodmares do you currently have on the farm, and what is the farm's approach to selecting stallions?

Chris Watson: We run about 80 mares for clients and ourselves. We look at all aspects involved when selecting stallions for mare bookings. Type, pedigree and commercial appeal are all important criteria when choosing a stallion for a mare.

PV: Any notable new mare additions to the 2018 line-up?

CW: G2 Doomben Roses winner Arabian Gold produced a lovely first foal, a colt by Snitzel and she is being covered again by Snitzel.

"Type, pedigree and commercial appeal are all important criteria when choosing a stallion for a mare. " - Chris Watson, Mill Park Stud

Beluga Blue, winner of the Listed Hill Smith S., and second in the G2 Wakeful Stakes has produced a really nice colt foal by Snitzel and is to be covered by I Am Invincible.

G2 Wakeful S., runner-up Glam Guru, who is a half-sister to the Group 3 winner Gamblin’ Guru and out of a half-sister to Gold Guru, was retired this season and is going to be covered by American Pharaoh.

Gold Coast Magic Millions Mares winner I Am Zelady is a full-sister to Comprendre and she’s produced a lovely first foal filly by Snitzel and is being covered this season by Zoustar.

Mella Maria, winner of the G2 Turffontien Spring Fillies’ Challenge, produced a first foal by Golden Horn and is being covered by Not A Single Doubt. 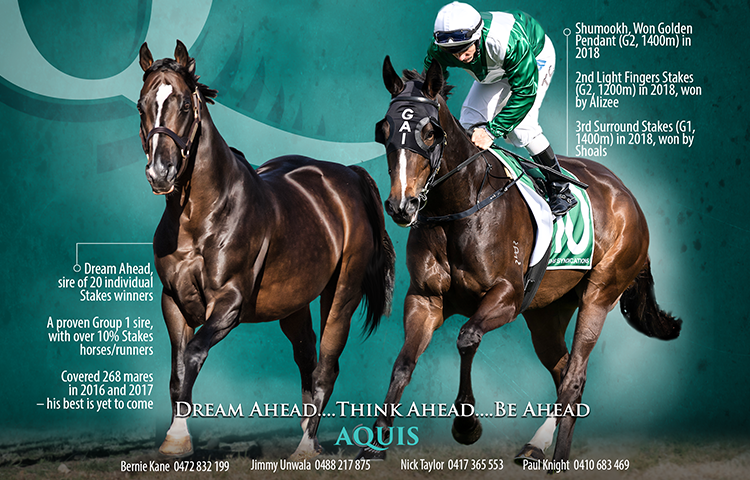 PV: Who is involved in the mating decisions?

CW: This is usually a long, drawn-out process taking weeks and involves the whole family. A good few arguments and bottles of red are involved before a decision can be made!

PV: How much do sales trends inform your decision making?

CW: We try not to be influenced by sale trends as we feel this is being reactive to historical market occurrences. We try to be proactive and focus on racetrack results and what we believe will be the next success stories in the stallion ranks.

We feel it’s important to go out onto the farms and look at the first couple of crops of foals on the ground of new stallions to get a guide on what types the stallion is throwing and what style of mare will mostly likely suit the stallion.

"We try to be proactive and focus on racetrack results and what we believe will be the next success stories in the stallion ranks." - Chris Watson, Mill Park Stud

PV: What about first-season stallions, how do you assess them and which stallions do you look to target?

CW: We don’t tend to trade too much so we aren’t heavily influenced by first season sires. As our clients and ourselves tend to try and buy quality blue chip mares, we therefore generally target proven stallions.

Of the first season stallions we do use, we are suckers for a deep pedigree, a quality type and proven ability on the track showing a bit of brilliance.

"We are suckers for a deep pedigree, a quality type and proven ability on the track showing a bit of brilliance." Chris Watson

PV: Where are some of your higher profile mares going this year?

CW: Dane Belltar, the dam of Fawkner is going to Sebring;

Noondie, the dam of Booker, will be covered by Written Tycoon

and Divine Maddona's three-quarter sister The Good Wife will be covered by Zoustar.

PV: Do you race many horses?

CW: Generally, each year around a dozen yearlings are kept to race between us and clients. A few clients race all their stock and some, like us, retain fillies to race to possibly add to the broodmare band if successful on the track.

PV: Can you give us a couple of youngsters to keep an eye on?

CW: Lonhro’s daughter Secretly Discreet, the first foal out of the G1 Oaks winner Maybe Discreet. A filly trained by Phillip Stokes which will be one to keep an eye on in the autumn. Has needed some time but showing raw talent at this stage.

Galahad Guru, a Camelot colt, who is a half-brother to Glam Guru and a colt that Leon Macdonald has a bit of an opinion.

Raised and sold by Mill Park horses to watch this season include Booker and Crown Towers, a Camelot colt in South Africa that the Snaith Team think is of Group 1 ability.

PV: Mill Park enjoyed another successful season in 2017-18, what were your highlights?

CW: These are the stakes-horses produced off Mill Park pastures in the last year or so:

All Too Huiying (All Too Hard-Madame Flurry by Perugino) won the Listed Batman S.;

Naafer (Lonhro-Very Discreet by Exceed and Excel) was second in the G1 Turffontein South African Nursery;

and Guard Of Honour (Northern Meteor-Victory Cry by General Nediym) was runner-up in the G3 Eskimo Prince S.

Next article
Scent of a winner packs them in