3 min read
With Group 1 winners in both Hemispheres, Iffraaj (GB) has succeeded at the shuttling game for a decade but perhaps without the credit he deserves.

From his Haunui Farm base in New Zealand and now at Dalham Hall Stud in England, Iffraaj continues to leave versatile performers to the highest level.

“There’s no question that he’s an under-rated stallion,” Haunui’s Mark Chitty said. “It’s a great game played slowly you could say, but he’s proven himself to be a truly international stallion.”

Iffraaj’s son Jungle Cat (IRE) is another fine example, and one with a sprinting bent. The 7-year-old will make his Australian debut at Caulfield in Saturday’s G1 Ladbrokes Sir Rupert Clarke S., for Godolphin and trainer Charlie Appleby.

Like his father, Jungle Cat has proved himself to be a successful traveller with two wins in England and no less than five at Meydan in Dubai, including the G1 Al Quoz Sprint at his last appearance in March.

“Iffraaj is in great shape and he loves the shuttle run.” - Mark Chitty.

“Iffraaj is in great shape and he loves the shuttle run,” Chitty said. “He was first due to come here in 2007, but that was the year of EI (equine influenza) so he came in 2008.

“He stands at Dalham Hall after starting out at Kildangan Stud in Ireland. He stands at 40,000 pounds and served 150 mares this year and we’re standing him at $25,000, which is great value for a horse of his record, and he’s closing in on 120 mares.” 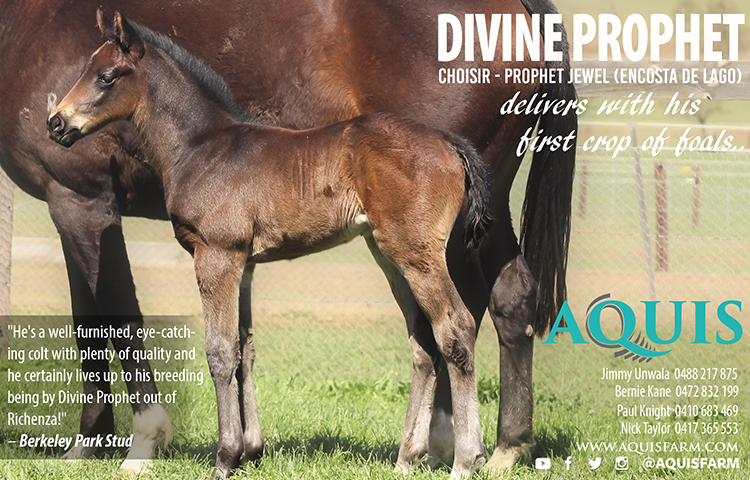 A three-time Group 2 winner and Group 1 placegetter in England, Iffraaj has left nine individual Group One winners including the New Zealand Derby winner Gingernuts (NZ), the Australian Derby winner Jon Snow (NZ) and the triple top-flight winner Turn Me Loose (NZ) in this part of the world.

“There’s no question that he’s an under-rated stallion.” - Mark Chitty

Ribchester (IRE) has been his leading European representative with four Group 1 victories while Wootton Bassett (GB) won the Prix Jean-Luc Lagardere. His son and triple Group 1 winner Almanzor (FR) is now continuing the Iffraaj line in his first season at Cambridge Stud.

“Iffraaj is so versatile and can get everything, 2-year-olds, 3-year-olds - colts or fillies - up to sprinter-milers and middle distance horses,” Chitty said.

“We’re very lucky to have him and I said to (father) Ron the other day that our horses going to the sales next year, on type, are the best we’ve had off the farm.”

Adding to the international flavour at Caulfield on Saturday will be jockey James Doyle, who will partner Jungle Cat after reining him to victory in the AL Quoz Sprint.

“We are fortunate at Godolphin to retain two world class jockeys, who we can send to any country when required,” Appleby said on the Godolphin website. “James knows Australian racing well and he has won a Group 1 on Jungle Cat.”

The trainer said Doyle might become a familiar face in Melbourne, as too could William Buick. “I expect William to also be riding there later in the Carnival. We have a big team to run.”