Two-year-olds by first-season sires Wandjina and Deep Field were among the most impressive winners in the 14 2YO trials held over the 850m at the Kensington track at Randwick on Monday.

With Sydney's first 2-year-old races of the season, the Breeders' Plate and the Gimcrack S. less than two weeks away, there were plenty of well-bred and high-priced runners.

There were 85 triallers in all, with the fastest coming in the very first trial of the day with the filly Exceed the Stars (Star Witness) running 48.96 s.

In terms of stallions, I am Invincible had three trial winners, Exceed and Excel and Sebring two, while youngsters by Bianconi, Star Witness, Wandjina, Smart Missile, Not a Single Doubt, Sizzling and Deep Field were all successful.

We've taken a closer look at five of the better trials in the session and also broken out the performances of those horses by first-season sires.

Have a look at our trial results page to view replays for all races. 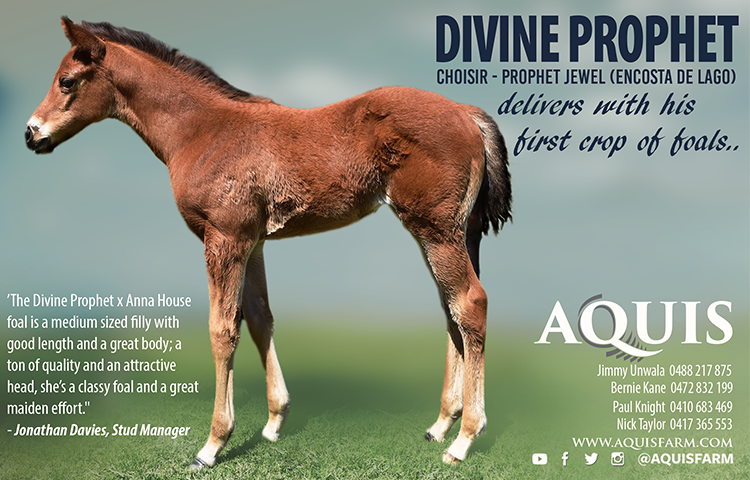 Mark Newnham's colt Exceed the Stars showed all the benefit of having already been to the trials a couple of weeks ago with a professional performance. He sat outside the pace and then drove clear, holding off Fiery Red (Pierro) to the line with six lengths back to third, which was another Pierro colt, Oslo, the son of Scandiva (Snippets).

Both were very impressive and the time stood up very well, 0.18 seconds faster than anything else on the day.

"That’s the benefit of him having trialled before, he made a couple of mistakes in that trial and I wanted to have him finely tuned for the Breeders' Plate in a couple of weeks' time," Newnham said.

"The 2-year-olds, you need to see how they pull up and it’s so far so good with him. We’ve been able to manage him well so far. His attitude, he came here, he paraded really well as he did the first time, and a lot of that makes them."

Exceed the Stars is the third foal from Exceed and Excite (Exceed and Excel) and he was a $220,000 buy at the 2018 Magic Millions Gold Coast Yearling Sale. The first foal is a winner in Korea, while the second is unraced. Exceed and Excite was a five-time winner who is a half-sister to Group 1-winning New Zealand 2-year-old Choice Bro.

Anthony and Edward Cummings look to have a very strong early-season 2-year-old with Honey Go Lightly, who recorded the fastest time of any of the fillies on the day.

The filly by first-season sire Wandjina sat just off the pace and Tim Clark shook her up down the straight before she nosed out the $625,000 Easter yearling Catch Me (I am Invincible) right on the line. Both fillies were strong and will be highly fancied should they progress to the Gimcrack as expected.

"She's been really quick from the gates from the get go. She's the sort of filly that wants to please you," Anthony Cummings said after the win.

"She hasn't taken a whole lot of work to get here and she’ll take a really big step off what she's done today. That's probably her first half-mile gallop. She'll be there for the Gimcrack and be in the mix there."

Honey Go Lightly is out of the group-winning mare Maslins Beach (Flying Spur), who Anthony Cummings also trained. She was a $250,000 buy at the 2018 Magic Millions and is a half -sister to stakes-placed Salamanzar. The family has plenty of 2-year-old quality with Maslins Beach a half-sister to G1 Blue Diamond S. winner Knowledge.

Victorian-based Ciaron Maher and David Eustace raised a few eyebrows when they brought Dubious to Sydney to trial and he lived up to the hype with a professional all-the-way win.

Driven through from the inside barrier by Hugh Bowman, Dubious controlled the trial and won with authority by 1.5l. The time wasn't especially quick, but he looked to do it easily. He is now on his way to the Breeders' Plate according to Shane McGrath, the CEO of Aquis who are part of the ownership of the colt,

"He's a lovely sharp 2-year-old. Ciaron has brought him up here with the Breeders' Plate in mind. He's done his job there, very professional and well-educated and I thought he was strong to the line," McGrath said.

"We had a chat when he went back in after going through the Aquis system. We felt he was early and on the program for horses coming through, the Breeders' Plate is the race the 2-year-olds come through and that was the plan behind him."

Dubious was a $350,000 buy from the 2018 Magic Millions Gold Coast Yearling Sale from the Kitchwin Hills draft. He is from the imported mare Suspicieuse (Fr), who was stakes-placed in France who is a half-sister to stakes winner Sediciosa (Fr). The family also includes the champion Japanese 3-year-old Neo Universe (Jpn) (Sunday Silence {USA}),

King's Champ looks well-educated and possesses a strong turn of foot based on his trial win. Sitting fourth in the run, Brett Prebble brought him to the outside in the straight and he and Lionsgate (More Than Ready {USA} fought out the finish, some six lengths clear of the rest of the field.

Both horses impressed and look to be well-placed headed towards the Breeders' Plate.

"This little horse has always shown us the ability, being out of Group 1-winning mare Yosei. He's not a mad running horse, like you saw today, he settled and finished off good," said trainer Gerald Ryan.

Out of a Group 1-winning mare, King's Champ was passed in for $200,000 at the Inglis Premier Yearling Sale and retained by Sun Stud. His dam Yosei has yet to have a foal make the racetrack with the older siblings by Fastnet Rock and Pierro named but unraced. There is also a yearling by Redoute's Choice.

The biggest winner in terms of margin on the morning came in the last heat when the Gerald Ryan- prepared Covert Ops won by eight lengths.

He sat outside the early pace set by Vendeval (Elusive Quality {USA}) and while those two horses were still level at the 300 metre mark, Covert Ops opened up another gear late on and charged clear to win by a big margin.

The time was 0.71s slower than the fastest on the day, but given 13 trials had passed in between, it is fair to say Covert Ops didn’t get the best use of the ground. He looks a very progressive 2-year-old.

He is the first foal from Group 3-winning mare Fine Bubbles and is another Sun Bloodstock bred and raced product. The final three trial winners on the day were all Sun Stud owned colts trained by Ryan and ridden by Prebble.

Bright Rubick (Trial 2): Finished second, beaten 1.5l. Missed start and trailed through most of the race, but worked home really nicely to finish on heels of winner.

Krameric (Trial 5): Finished fourth, beaten 2.1l. Jumped ok, settled midfield before veering off at the top of the straight, but then ran on well to finish just behind placegetters

Chat (Trial 9): Finished sixth, beaten 15.7l. Jumped well but all went wrong after that and was eased up late in the race.

Redicon (Trial 13): Finished second, beaten 0.2l. Funny trial. Missed the start but then was allowed to rail up and lead on the bend. Held on well, only pipped late.

Watch and listen to trainer Gerald Ryan, and jockey Adrian Layt on the trials of the Deep Field progeny.

Vaporizing (Trial 3): Finished third, beaten 1.2l. Missed start slightly, then railed up well behind the leaders. Didn’t get a lot of room between runners before cutting back to the inside and working home ok.

Honey Go Lightly (Trial 8): Won. See above. Jumped very well. Tracked the leaders throughout, presented to the outside finished hard and fought out finish to win. Looks a very progressive type.

Watch and listen to trainers Richard Freedman, Paul Snowden, and Anthony Cummings on their Wandjina progeny.

Out Sweet Love: (Trial 2): Finished fifth, beaten 4.7l. Jumped fairly, then pushed up to be close to the lead on the bend. Battled a bit down the track, drifting out deep under pressure.

Watch and listen to trainer Jamie Thomsen on his Time For War filly which trialled today at Randwick.

Disruptor (Trial 9): Finished second, beaten 1.5l. Poor at start, but was able to rail up on to the back of the leader and winner. Held ground down straight.

Watch and listen to trainer Gary Portelli on his Dissident colt which trialled today at Randwick.

Next article
2YO Trial Results