4 min read
For jockey Hugh Bowman, the Winx (Street Cry {Ire}) story - the latest chapter written with a 20th G1 success in the Colgate Optic White S. on Saturday - is about much more than being on a champion racehorse.

Reflecting on her four-length win, her ninth over the famous Randwick mile and her 27th in succession, Bowman spoke with elegance and honesty about the Winx journey.

While a world class jockey in his own right, Bowman conceded she has given him the privilege of taking him where very few involved in racing have ever been before.

"I am in a position to say that we'll be lucky to see another one like her, while I'm alive anyway. How lucky I am to be involved with such a horse," he said.

"Growing up in the central west of New South Wales and dreaming of being a jockey and watching the likes of Octagonal. I rode against Lonhro and I rode against Black Caviar."

"How lucky I am to be involved with such a horse," Hugh Bowman on Winx.

"I cried when Makybe Diva won her third Melbourne Cup and to think a horse of that calibre and maybe even better has come along to me and Chris Waller, it's amazing."

But that journey is not just confined to jockey, trainer and horse. 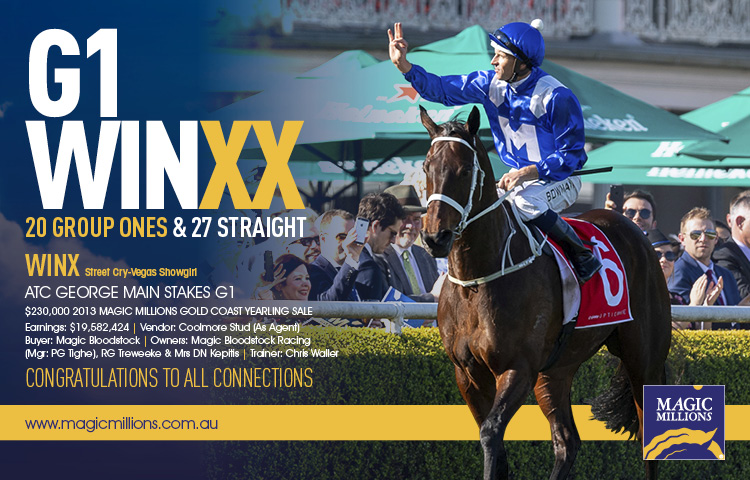 A nation on her back

Every time Winx steps out, it is an event of national importance. For some that would be a cause of pressure, but Bowman feels the privilege of being a part of a remarkable Australian story.

"She’s brought so much joy to not only those connected with her but far and wide across Australia and the world," he said.

It is that effect, as much as her racetrack record, which puts her in the most elite company.

"She’s brought so much joy to not only those connected with her but far and wide across Australia and the world."

The champion Phar Lap lifted a nation during the hard times of the 1930s, while Black Caviar became a hero to a new generation and her narrow win at Royal Ascot has become a 'where were you?' moment for a sporting nation.

So soon after Black Caviar, we have been privileged to have had Winx, who has surpassed everything that has come before her with a winning streak that never looks like ending.

Again, as happened in her first-up win in the G1 Winx S., there was a moment for Bowman and the rest of us on Saturday where we wondered if she could make the ground on Le Romain (Hard Spun {USA}) as he surged to the front at the top of the straight.

"I didn’t feel in danger, but I didn’t feel like she was going to be as dominant as she usually is," Bowman said. "But when that turbo kicked into gear at the 250m it was all over.”

"It is the first time I have niggled her around the corner in a 1600m race but I guess that’s a couple of things. The pace we were going and the class of horses she races against, they are the best in the country.”

It's almost as if you forget who she is for a moment, only to make a nonsense of your doubt within a matter of seconds.

Waller said post-race that a decision on where Winx heads next on the path to a fourth G1 Cox Plate would be made in the coming days.

"We are thinking about a Cox Plate obviously and the best way is to take it one run at a time,” he said.

“I would say it will be in Melbourne (for the G1 Turnbull S.) but we will enjoy today and talk about it next week, it will be no great surprise I am sure but if we do change it will be for a reason and that reason is the horse comes first.”

Next article
Ball of Muscle states his Everest case