5 min read
The Aga Khan's Siyouni (Fr) has cemented his position as one of Europe's leading stallions since retiring to Haras de Bonneval in France. Siyouni made headlines earlier this year when his first Australasian runner, Aylmerton, won the G2 Todman S. at Randwick.

TDN AusNZ's Gary King sat down with Georges Rimaud to find out more about the stallion, his thoughts on the Australasian industry, shuttle sire Charm Spirit's great start to stud and the Aga Khan's partnership with Arrowfield Stud.

GR: As you well know, Siyouni's popularity in Europe is very intense. His level of achievement from a very low fee, year after year and generation after generation, has attracted breeders’ attention and liking.

This popularity has transpired all the way down to Australia, especially since the success in the autumn of Aylmerton in the G2 Todman S. It generated significant interest from Australasian breeders and we wanted to meet that demand, which is why we decided to make Siyouni available on Southern Hemisphere time.

GK: As you mentioned Aylmerton looked like a very smart 2-year-old last season. This obviously helped to raise Siyouni's profile in Australia?

GR: Yes, but Australians are well aware of international racing and breeding news.

Aylmerton has possibly reassured them that Siyouni would be capable of producing the type of stock that is required in Australia. After all, Siyouni has had two Classic winners [Ervedya and Laurens] in Europe and a high percentage of stakes winners.

This popularity has transpired all the way down to Australia, especially since the success in the autumn of Aylmerton in the G2 Todman S. It generated significant interest from Australasian breeders and we wanted to meet that demand. - Georges Rimaud

Furthermore, he has an interesting pedigree, being by Pivotal (GB), from the Nureyev (USA) sireline. Nureyev is often synonymous with precocity and speed, which is required in Australia. 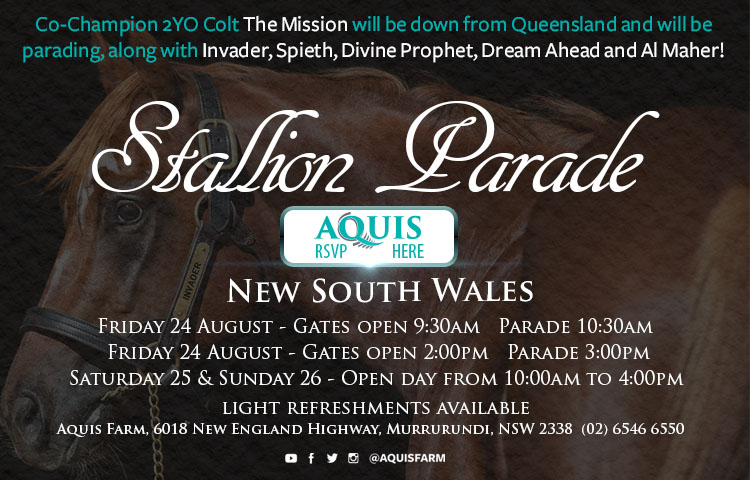 GK: Was there ever any consideration given to shuttling the stallion?

GR: Yes, it was considered and we had received offers from Australia. However, Siyouni has been very busy every Northern season including this last one and it might have been a little bit too much for him to travel to Australia.

We decided not to do that and instead to make him available Southern Hemisphere time. It’s proved to be successful; we have a fair number of mares booked to him at this stage so we should soon see some Siyouni foals in Australia.

GK: Charm Spirit (Ire), who shuttles to Windsor Park Stud, has made an encouraging start at stud. You must be thrilled with his juveniles in Europe so far?

GR: Yes we are thrilled indeed, Charm Spirit has had 13 winners to date in England, Ireland and France and he is ranked third first-season sire in order of number of winners. As you said he shuttles between New Zealand (Windsor Park Stud) and Europe, where he alternates between the United Kingdom and France. His first very successful crop was conceived in England at Tweenhills and that is good news for the French breeders who used him at Haras de Bonneval.

We are delighted for our partners Qatar Bloodstock. He covered a good book this year following the early successes of his 2-year-olds. We were very pleased with that and it’s another high-quality stallion standing at the Aga Khan Studs. Like the other stallions in our roster, Charm Spirit was picked carefully for his pedigree and performances and we believe that, like the others, he has a great genetic potential.

GK: You're a frequent visitor to Australia and board mares at Arrowfield Stud. How did this partnership come about?

GR: This venture came about following a proposition from John Messara. At the time, we had noticed a growing interest for Aga Khan bloodlines from Australasian breeders who came to the breeding stock sales to purchase some of our mares. We also had a high number of broodmares and some that we did not want to part from.

This venture came about following a proposition from John Messara. At the time, we had noticed a growing interest for Aga Khan bloodlines from Australasian breeders who came to the breeding stock sales to purchase some of our mares. - Georges Rimaud

It was an opportunity to spread our families across the world; you are very well-placed to know that this is a global industry, and it is important for us to see our bloodlines present and successful in every country. We also liked the idea that it was meant to be a long-term venture and the opportunity to mix our female lines with Australian sirelines.

This partnership is starting to produce Group 1 winners, like Whisky Baron (Manhattan Rain) who won the G1 Sun Met in South Africa, and more recently The Autumn Sun (Redoute’s Choice), out of a sister to Azamour (Ire), who was unbeaten at two this year and won the G1 J.J. Atkins Plate.

GR: For the right stallion, we would definitely consider it. I would prefer to start in the first years rather than starting once the horse is successful, as it raises a number of challenges linked to the stallion’s high profile and value.