5 min read
Rob Waterhouse will be penning a regular column for TDN AusNZ. In this initial installment he will focus on last season's top 2-year-olds.

To introduce myself, I guess would describe myself as a racing analyst/trader. I analyse all Australia and New Zealand race form and use this analysis to bet both as a bookmaker and as a punter. I have done that all my adult life and know no other way of earning a living. I also keep the form and ratings for the United Kingdom and the United States.

I write this from a Darwin hotel room in the north of Australia as tomorrow the Darwin Cup is run. They race here on dirt mixed with sump oil. Every year here I love the challenge of betting at Fannie Bay and relish the diversity.

I, uniquely, hold bookmaking licences in seven of the either states or territories of the Commonwealth and I have fielded in the Dominion of New Zealand. It was suggested I produce my Australian Free Handicap for the 2-year-olds of last season for TDN AusNZ, a publication I very much admire.

For about the last 90 years, the UK Jockey Club has declared, at the end of the season, a set of weights for an actual race run in mid-April. This serves as a record of the rankings of the season’s 2-year-olds and the race is a way to measure the improvement of some as they mature differently. The expression Free Handicap has subsequently been adopted world-wide.

At the risk of seeming a bit perverse, I keep several handicaps: one the horses’ rating with a conservative weight-for-age increase; another with a rating plus what I actually think (based on several factors) he will improve by and time rating (which includes no weight-for-age bonus).

Perhaps it should be said clearly that the common perception that very good 2-year-olds ‘don’t train on’ and ‘they burn’ out is just wrong. They do better as a group than their lesser-performed contemporaries.

The common perception that very good two-year-olds ‘don’t train on’ and ‘they burn’ out is just wrong. They do better as a group than their lesser-performed contemporaries. - Rob Waterhouse

Racing expert, Daniel O’Sullivan, for whom I have great respect, put it succinctly when he recently wrote (on BetSmart Racing Service): “Let’s consider the past six seasons and look at the placegetters in each of the Group 1 juvenile races.

Furthermore, of the 26 2-year-olds that won a Group 1 juvenile race in those six seasons, eight of them went on to further Group 1 success later in life. That’s 30.8 per cent of Group 1 winning 2-year-olds go on to win a Group 1 at three or older.” Let’s put that ‘burn out’ canard to bed.

Next thing to say is that if you track the class of races, as the months go by, the ratings of the races improve matching the weight-for-age scale. Unsurprisingly. But individual horses don’t make anything like that improvement, usually about half the weight-for-age figures. There are exceptions, but this is crucial for form study. And this is surprising to most people. 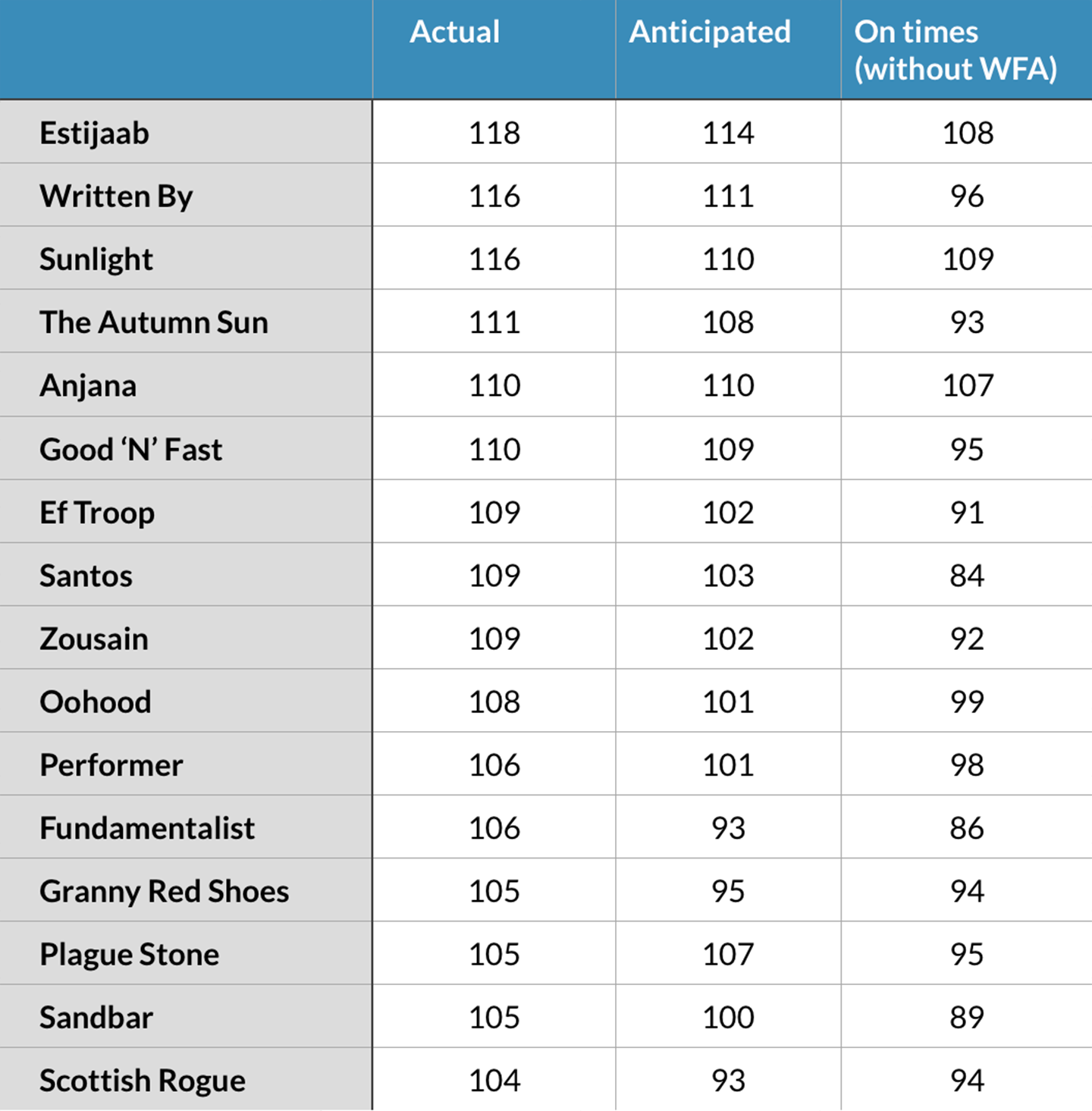 Golden Slipper S., winner Estijaab (Snitzel) is a worthy leader. Anjana (Sepoy) is a filly who would be underestimated in the official numbers, but is a worthy inclusion as are Plague Stone (Lonhro) and Good ‘N’ Fast (Sebring). The question arises, where does this put Australia two-year-olds on the world stage?

At the recent Inglis Yearling Sales, I renewed my acquaintance with Bill Oppenheim and met the charming Dr Emily Plant. I said to Oppenheim, perhaps provocatively, that I’d read a speech he’d given where he’d complemented Australia saying that, in his opinion, Australia was the third leading bloodstock area in the world and that I agreed, but I’d put Japan first and Hong Kong second. He thought that statement perverse, I suspect. I know my ratings of Japanese stayers are the highest in the world and Hong Kong horses (of all distances but not 2-year-olds) are not far behind.

I know my ratings of Japanese stayers are the highest in the world and Hong Kong horses (of all distances but not 2-year-olds) are not far behind. - Rob Waterhouse

Seems obvious to say, but Japan and Hong Kong are perhaps unique in that owners have a ‘positive expectation’ i.e. as a group they finish in front and they race for the most money. Doesn’t surprise me they rate so well.

In the case of 2-year-olds, I would find it is easy to put the case that Australia’s are world best and I mark them that way. I concede that it is hard to test because the different foaling dates of the two hemispheres, but our sprinters go well at Royal Ascot and everybody would say our yearlings and 2-year-olds look more precocious than the Northern Hemisphere’s young horses.

So I’m sticking with my view.