5 min read
On a day where thoroughbred history was rewritten, there was a moment during the G1 Winx S. where an entire nation held its breath.

She does that to you, Winx (Street Cry {Ire}). She makes you think she's beatable for a fleeting moment and then makes you look a fool when she eases to yet another victory. This time it was No.26, significant because it was one more than the brilliant Black Caviar's streak which ended with her retirement five years ago.

Even for Winx, this was a rare occasion. A return to the track in her own race, with a shot at a seemingly unthinkable piece of history and with her popularity at a level higher than ever before.

"When she balanced up and saw the winning post, what can I say, she is incredible,” jockey Hugh Bowman.

Yet about 400m out, with Winx about six lengths off the lead, even jockey Hugh Bowman wondered for a moment whether this day would make history for all the wrong reasons.

"It is a bit short of her best distance. Glyn (Schofield on Kementari) and I came around the corner together. I thought I was near my top. She was struggling at the pace of this distance. When she balanced up and saw the winning post, what can I say, she is incredible,” Bowman said. 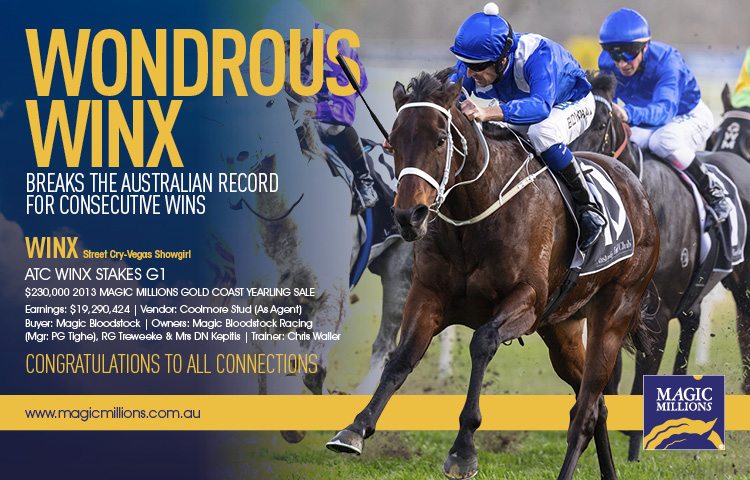 It was a similar feeling for owner Peter Tighe.

"The world stopped for me for a moment. my heart stopped. You doubt her a little bit and she does that. I don’t know how to explain it," Tighe said.

However, watching on a screen behind the stands as he traditionally does, trainer Chris Waller never doubted. He knows the horse better than anyone and when the pressure came on, he had every faith in her.

"You are always just hoping to see her do it. The pressure came into the race and her and Kementari loomed large. What she does to horses is simply break their hearts. She can maintain it and some other very good horses can’t,” he said.

In the end, the margin was a dominant two lengths, with import Invictus Prince (GB) (Dansili {GB}) running the race of his life in second and stablemate D'Argento (So You Think {NZ}) another length back in third.

The horse which seemed primed to cause the upset, Kementari (Lonhro {Aus}), loomed on the inside of the Winx but would finish 3.2l adrift of her in fourth.

"It shouldn’t be about me, it’s about that amazing animal. What she is doing for sport in Australia - we should all take a bow and say well done," trainer Chris Waller.

For everything that has been said about Winx's capacity to remain at her peak as a 7YO, Waller sees nothing to suggests she has taken a backward step.

"I was just looking for signs of her losing that dominance. I haven’t seen one ounce of it. If anything I’ve seen improvement. It’s quite staggering," he said.

The accolades for the trainer continued to flow post race, but the man himself, typically emotional but typically humble, was having none of it.

"It shouldn’t be about me, it’s about that amazing animal. What she is doing for sport in Australia - we should all take a bow and say well done," Waller said.

The journey only gets more amazing for Bowman as well.

"Lots of children here and that’s what I love the most. Parents are bringing their kids out to see a horse of the calibre we may never see again. They only come along once in a generation."

The Winx journey continues on towards a fourth G1 Cox Plate with her next start likely to be in the Colgate Optic White S. (George Main) at Randwick on September 15.

"Lots of children here and that’s what I love the most. Parents are bringing their kids out to see a horse of the calibre we may never see again. They only come along once in a generation." - Hugh Bowman

Having sailed into uncharted waters and having lost none of her dominance, every step from here to Moonee Valley in October will build the amazing story even further.

Of those she left behind, trainer Matthew Smith will be delighted with Invictus Prince's performance. He couldn’t have possibly expected the import to run so well and a big campaign awaits him.

D'Argento didn’t have the easiest run and was no match for his stablemate, but jockey James McDonald was rapt with what he saw from the G1 Rosehill Guineas winner first-up.

“He went brilliant, he travelled beautifully in the run and dashed up the rise,” McDonald said.

There was no such praise from Glyn Schofield aboard Kementari, who said the 4yo 'ran okay' but his spring plans are now unclear.

Winx's impact on the pedigree pages of her family has already been emphatic. She has 28 stakes wins, 19 at Group 1 level and her dam Vegas Showgirl (NZ) is one of the most valuable broodmares in the country's slated to visit Deep Impact (Jpn)

Winx's half-brother Boulder City (Snitzel), once a $2.3m yearling, is now standing at stud at Riverbank Stud while she has a filly sisters by Snitzel and Exceed and Excel who were both kept by her breeder John Camilleri.

The $230,000 paid for her by Peter Tighe at the 2013 Magic Millions Yearling Sale has proven an extraordinary investment as she nears $20 million in prizemoney.