5 min read
Having experienced their most successful year ever, Catriona and Royston Murphy of Sledmere Stud have been plotting their future strategy for success, including the breeding plan for the 2021 yearling crop. Speaking to TDN AusNZ off the back of a season where they generated over $13m in aggregate yearling sales - putting them seventh overall in terms is Australian vendors - Royston Murphy is expecting an even bigger result at the sales this year as well as a typically busy breeding season.

"I can honestly say this year, we have about 100 yearlings on the farm and it’s the best crop of yearlings that we’ve ever had at Sledmere," Royston Murphy said.

"There are so many well-bred and good physical specimens, it should be a very exciting 2019." - Royston Murphy

The support of their major clients, the likes of China Horse Club, Rifa Mustang and Mill Park, has been crucial in that success, and in terms of future crops, Sledmere will send up to 210 broodmares to matings in the next few months.

"There are so many well-bred and good physical specimens, it should be a very exciting 2019."

Ninety per cent of those mares are client-owned and while in the end, the decision on who they head to is made by the mare's owner, Catriona and Royston's expertise and opinion is often sought out.

"Generally across the board, we touch base with most of the clients about matings. The bigger ones have it in their own minds what they want to do to," Murphy said.

Their highest-priced yearling of 2018 was out of Maidel (Ad Valorem) and went for $800,000 to Spendthrift at the Inglis Easter Yearling Sale. Owned by major client Rifa Mustang, Murphy said that Written Tycoon colt was a great example of finding the right physical specimen and being able to shape perception in the market.

"The sales to me are generally a beauty contest. It’s not often you see something that is not a good type, top the sale." - Royston Murphy

"If you sell a horse like the Maidel we sold by Written Tycoon, you just think he looks like a horse who will really run. You have to back your own judgement and show the market you are confident with what you are producing," he said.

Maidel will have a Star Witness yearling at the sales later this season, while she will visit Written Tycoon again this spring.

"Obviously, if you used a stallion before, you know what the mare can throw and if you get a huge result, it’s always in the back of your mind that you want to use that stallion again, because it’s worked before," he said.

Sponsored video
We’re ready, are you?

Breeding for pedigree or type?

Pedigree is important for Sledmere Stud, but they are strong believers in finding the right physical match for their mares.

"Because we are a commercial property, and all our yearlings are pretty much for sale, the physical attributes of a horse are key," he said.

"You've got to catch people's eye with a horse. I think trying the physically suit mares to stallions is very, very important in our game. The sales to me are generally a beauty contest. It’s not often you see something that is not a good type top the sale."

"I always like to look at a stallion who was a high-priced yearling," Murphy said.

That comes down to buying the right mares and getting them to the right stallions.

"I always like to look at a stallion who was a high-priced yearling," Murphy said.

"To me that shows that he was obviously a good physical specimen. Most stallions you look at they look great, because they’ve had time to let down, but you want to look back and see whether they were early maturer as a young horse, because most of our sales are early and you want most of those horses looking reasonably mature when you get to the sale." 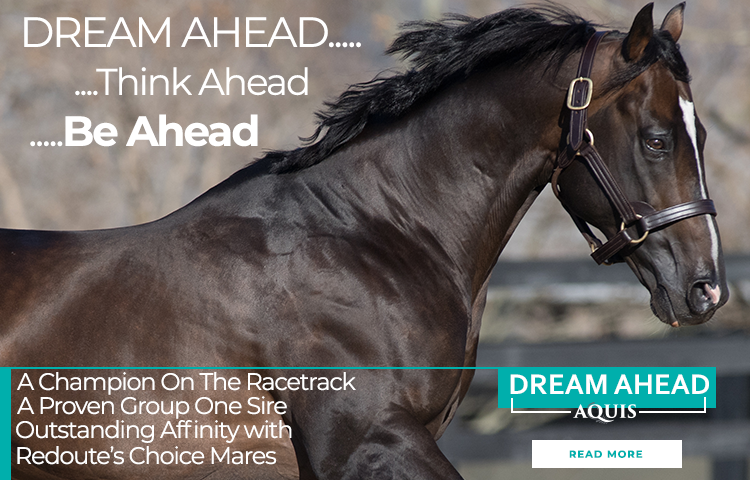 A Fastnet Rock yearling out of Ocean of Tears (Minardi) went for $600,000 for Sledmere Stud at the Easter sales in April. This year Ocean of Tears is headed for first-season sire Russian Revolution in a trend that is becoming more and more common.

"People love them (first-season sires) as they are fresh in the memory from running and we see that market is quite good. We have to be mindful that syndicators play a big part in the market. For those guys selling to the mums and dads or big players, they are now looking at the newer sires, not necessarily proven ones," he said.

"For those guys selling to the mums and dads or big players, they are now looking at the newer sires, not necessarily proven ones." - Royston Murphy

Murphy expects Russian Revolution to be 'top of the tree' of the fresh crop, while Merchant Navy and Hellbent should make a considerable impression, with Spieth his best value choice.

This year they have acquired a close relative to 2017 G1 Golden Slipper S. winner She Will Reign (Manhattan Rain) called Kuching (Tale of The Cat), who is currently in foal to Zoustar and will go back to the emerging sire this spring.

They also have the mare Catchulata (Charge Forward), who's out of a half sister to dual G1 winner Response (also Charge Forward), the dam of 2018 Golden Slipper winner Estijaab (Snitzel).